NetApp Insight 2015 – Las Vegas is over and, by most accounts, was a rousing success!

We announced a ton of new, innovative things (which I can’t detail yet). My sessions went pretty well. The live demo we did got a lot of visibility and people were excited about it. The NetApp Data Fabric story became a little more clear with some help from Dave Hitz. Neto (from Brazil) did a live demo of AFF failover that was pretty hot. And a 3x Flash Performance Guarantee marketing initiative called EMC You Later was announced. Coincidentally (yes, really), that week another EMC announcement was made.

And the Flash even made a cameo at the Insight party with Train: 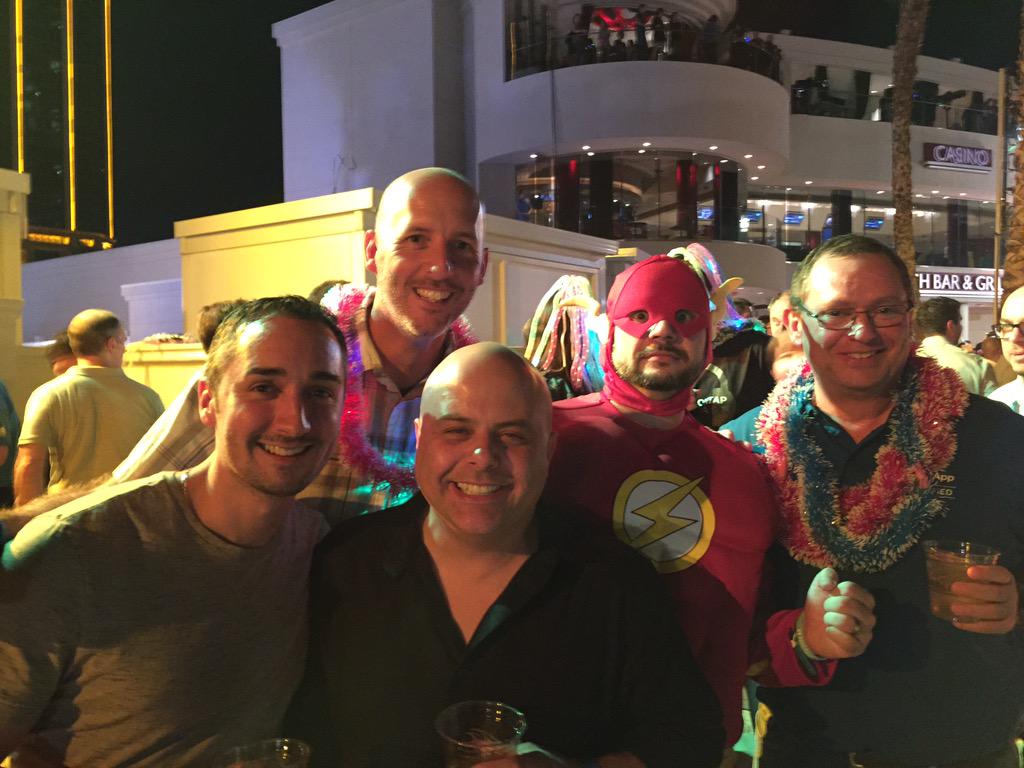 Now that it’s all over, it’s almost time to do it again. Insight EMEA starts up on November 17 in Berlin!

Expect even more information on the Data Fabric, upcoming features and announcements for NetApp as a whole.

For a recap of some of that from Vegas, see these posts.

Sign up for Meet the Engineer in the Berlin schedule builder to meet me or other NetApp experts.

And last, but not least, my session schedule…

This year, I’ll be focusing solely on multiprotocol in clustered Data ONTAP in an attempt to help people better understand the myriad questions surrounding the use SMB and NFS on the same unified data storage. I’ll be doing a session on general multiprotocol best practices and operation called:

1884-2:  Unlocking the Mysteries of Multiprotocol NAS in Data ONTAP

Having trouble understanding multiprotocol? Can’t figure out the difference between authentication and authorization? Do you think a name mapping rule is something doctors provide to new parents at the hospital? Wondering what a “CIFS/SMB” and “NFS” is anyway? This session can help! We cover all things NAS in clustered Data ONTAP, from the basics to the best practices, and try to help make multiprotocol a little clearer for storage administrators.

For a deeper understanding of the inner workings of authentication in clustered Data ONTAP (which is integral to multiprotocol), I’ll be doing a session called:

Authentication in clustered Data ONTAP uses the security daemon (SecD) for connectivity to external dependencies for NAS protocols such as Active Directory, LDAP, NIS and DNS. This session will cover how SecD works in clustered Data ONTAP 8.3 and beyond, as well as how to troubleshoot issues and what kind of statistics are available for SecD and external name services.

See you in Berlin!

Well, it’s Wednesday night in Las Vegas and NetApp Insight 2015 is wrapping up.

If you use a Fitbit, then you know you can track your steps. I have one of the little ones that fit on your pocket, so I don’t think it’s super accurate, but for the sake of information, I totaled the number of steps/miles I walked this week so far (starting Sunday).

(Yes, my feet are killing me.)

By far, this has been the busiest I’ve been at a NetApp Insight event. I had 5 sessions, did 5 live demos, a meet the engineer session and multiple NetApp A-Team events, as well as trying to help out with the Tech ONTAP podcast and meeting with various customers and partners. But, busy is good – it means you’re doing things people are interested in.

I had two sessions this year. One on multiprotocol NAS and one doing a deep dive into authentication. I’ve presented 4 of the 5 as of Wed night and so far, so good. People seem to be pretty interested in the topics. Attendance was modest, but I think I presented ok. My next session is Thursday at 9AM, so that ought to be… interesting. 🙂 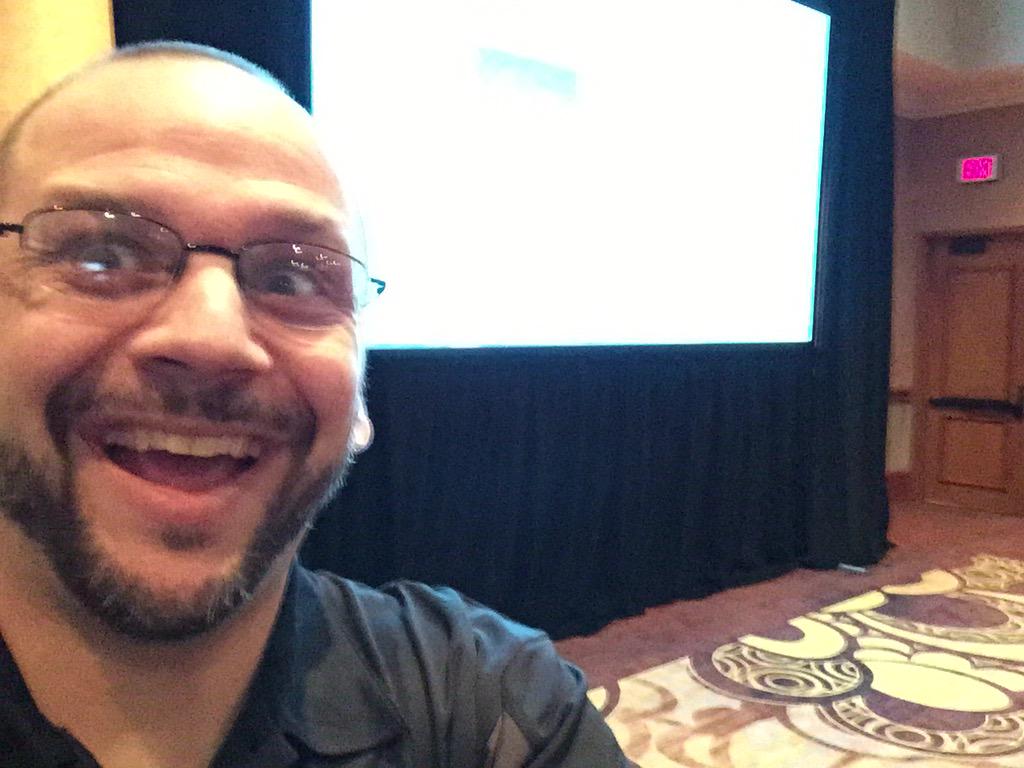 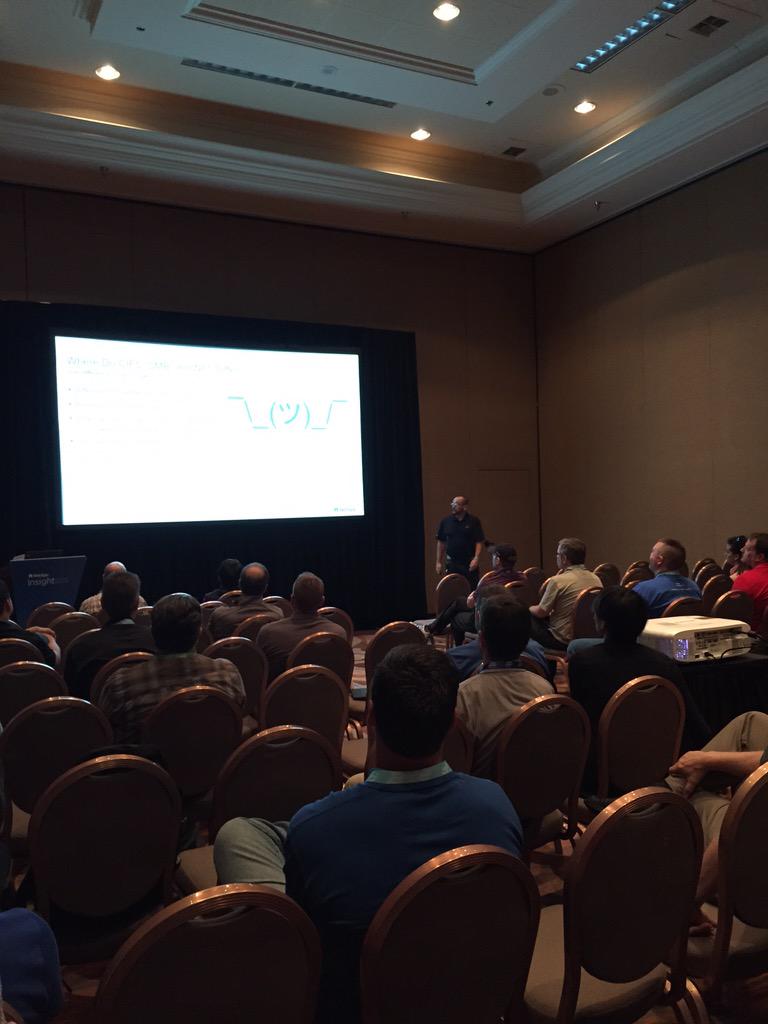 After that, I won’t present them again until NetApp Insight Berlin!

This was one of the busiest parts of the conference for me. We were given about 2 weeks to put together a live demo that was going to have a ton of visibility and generated a LOT of excitement. So, we had to spend extra time ensuring things didn’t blow up on us. There were a few hiccups, but over all, the demos seemed to be a success. Large crowds and lots of buzz!

As we get closer to the release date for the new feature, I can talk more about it. Until then, stop by booth 303 at NetApp Insight 2015 in Las Vegas to see what’s been generating so much interest!

This was an hour long session where I actually was able to SIT! 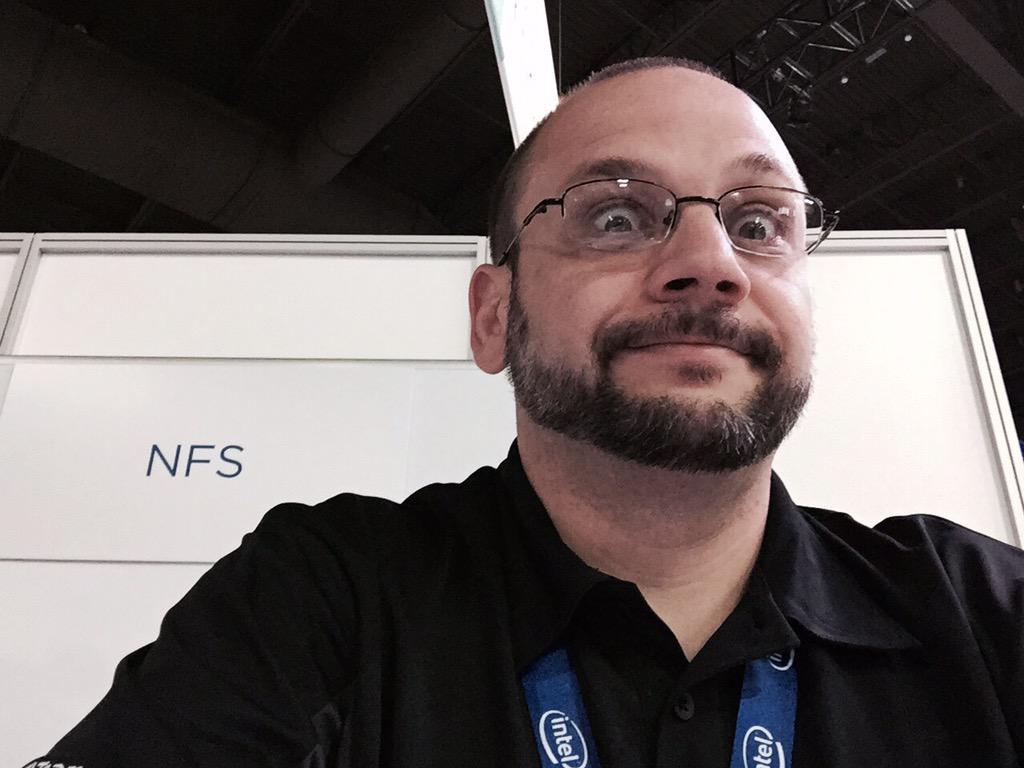 Customers and partners would come up and pick my brain on all things NFS/NAS. Had some pretty good conversations and was able to help clarify things for some people.

If you’re not familiar with what the NetApp A-Team is, it’s a group of really smart partners and resellers that are advocates of NetApp stuff.

I operate as a technical adviser to the group and attempt to answer questions or at least help the group get the answers they need.

Most of the gang was in Las Vegas and were having a great time at the conference. They were able to talk to some members of the press, join the Tech ONTAP podcast and attend several functions with members of NetApp.

I assume they had a good time. Some had *too* good of a time. (yes that is me in a pirate hat) 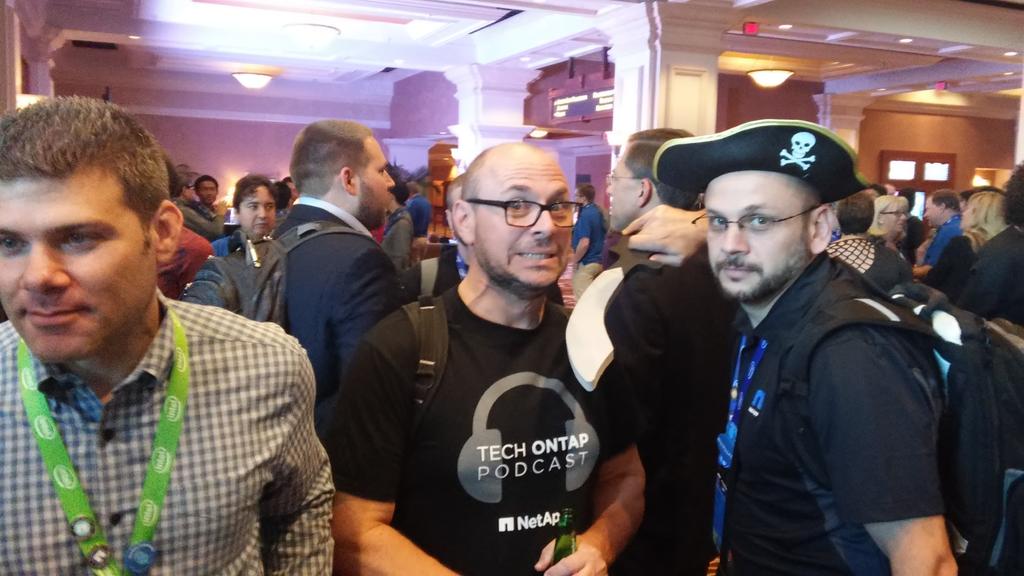 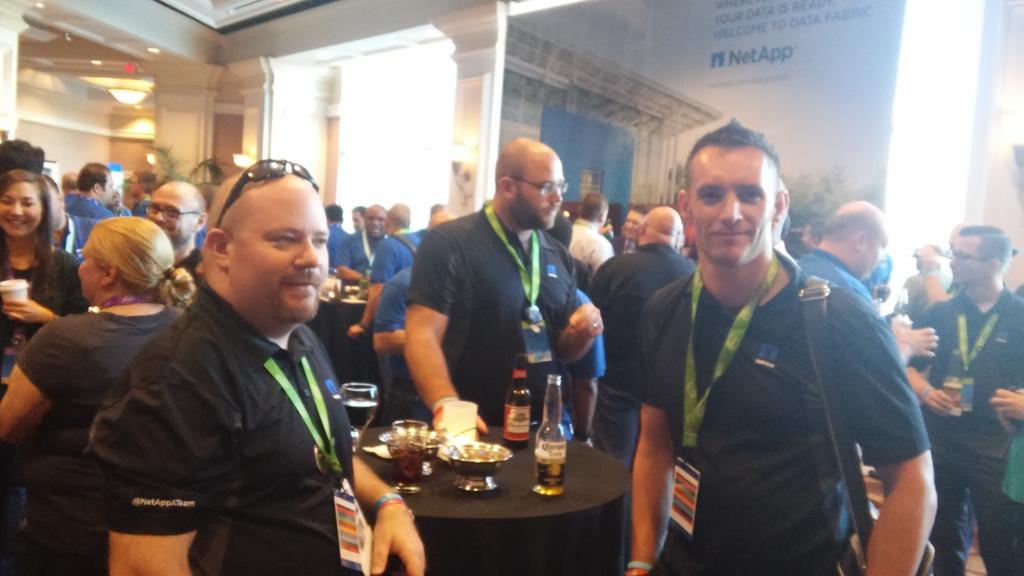 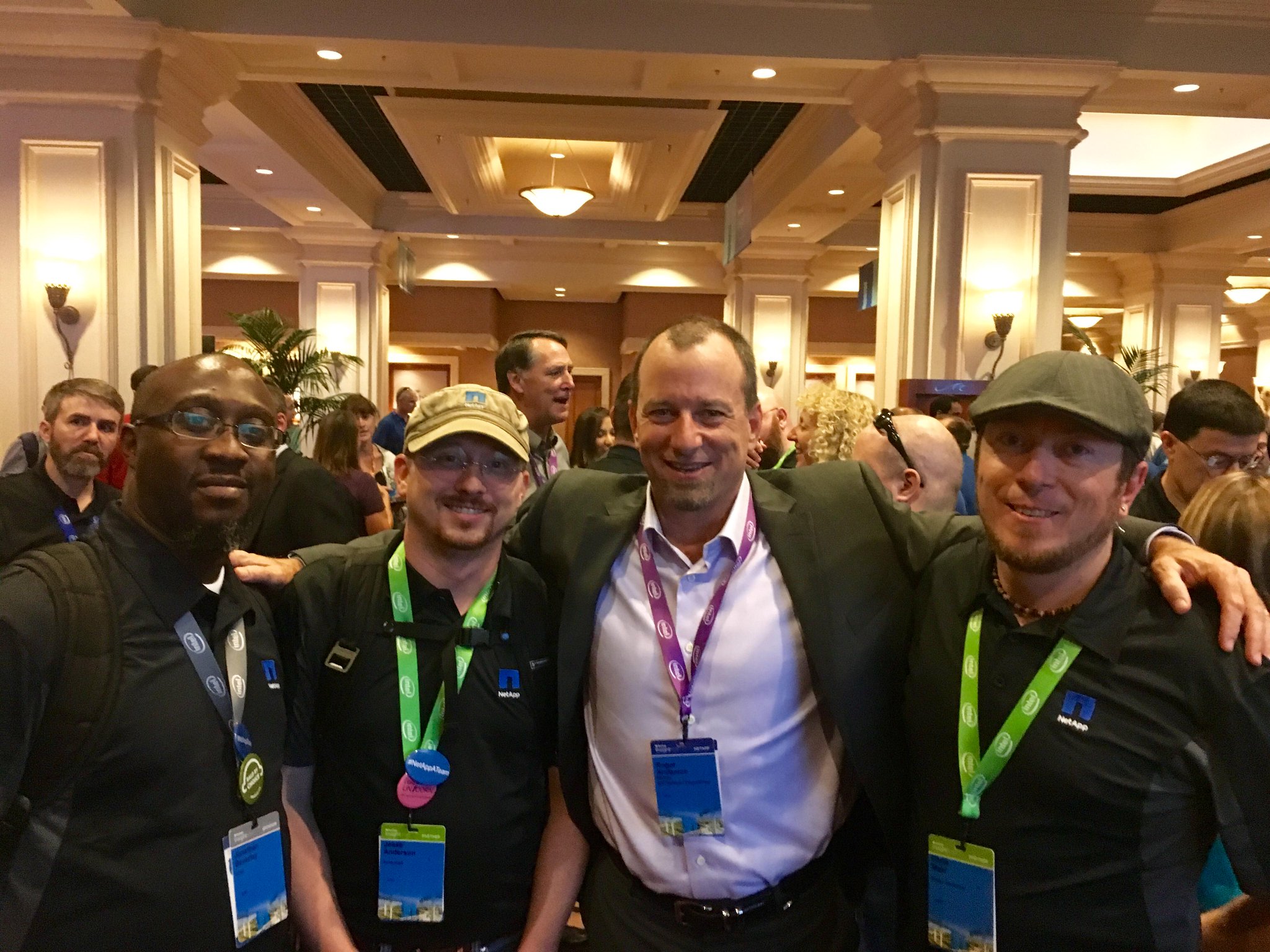 At the end of the evening, we were treated to a NetApp event featuring Train playing a concert. Since we’re in day 3 of the show, I believe I reached critical mass and just let it all hang loose. 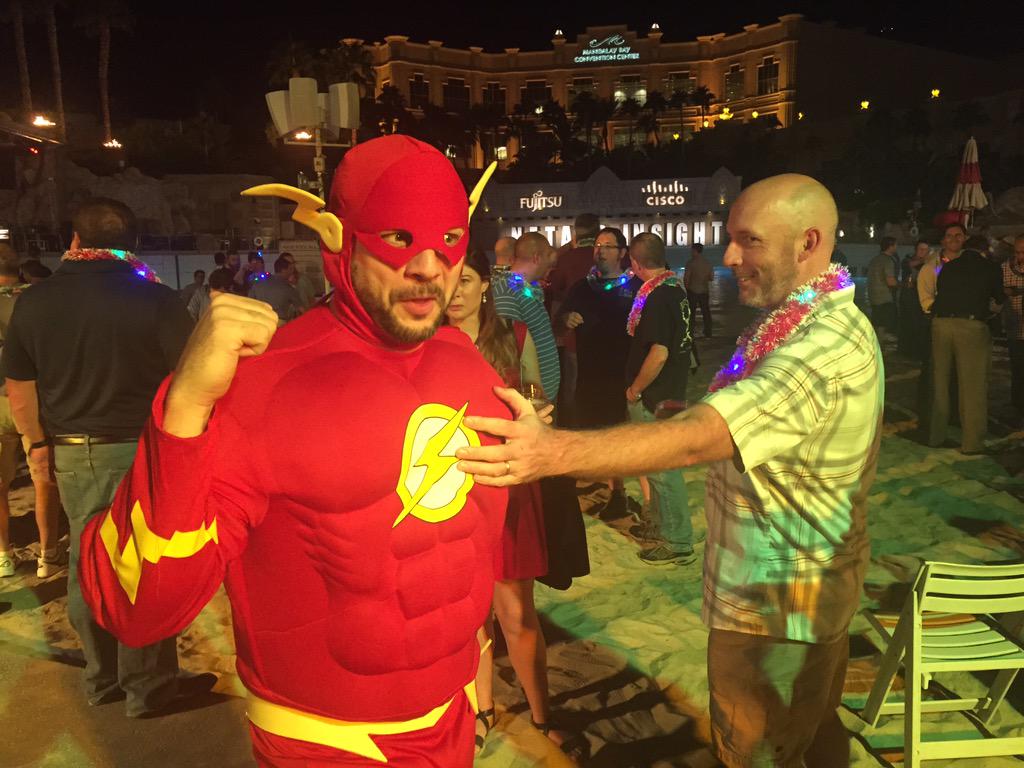 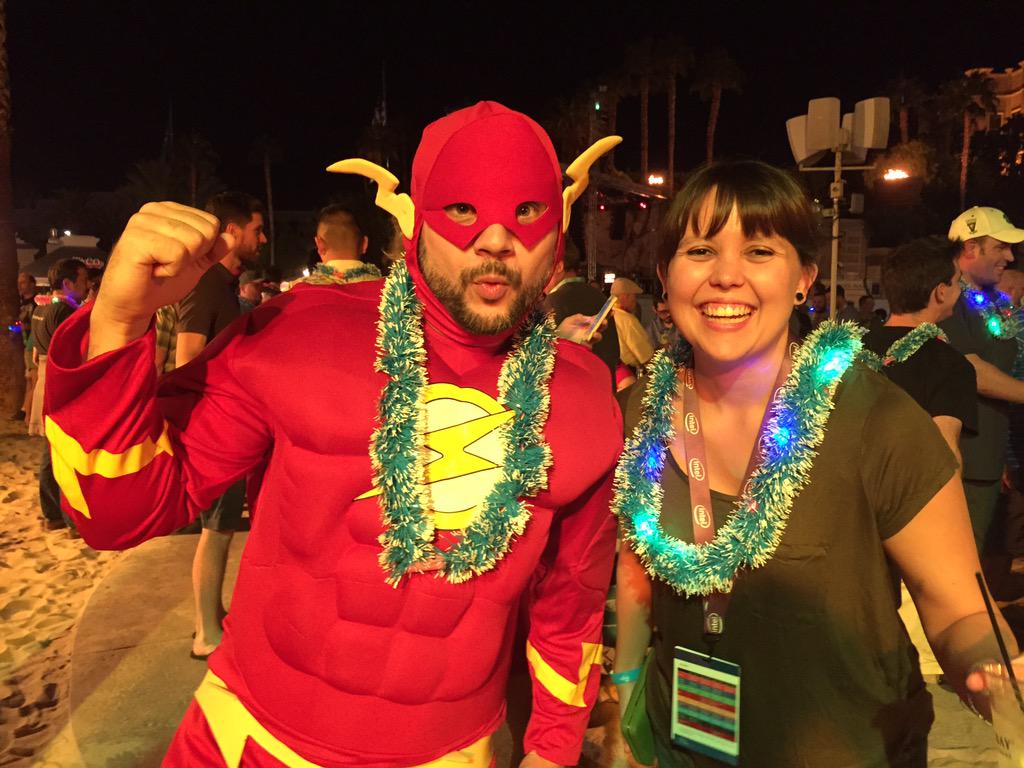 All Flash. All the time.

NetApp Insight 2015 in Las Vegas is finally upon us and we’re past day 1 of the show. I’ve already delivered one session and did the very first live demo of the stuff we’ve been working so hard on the past few weeks. 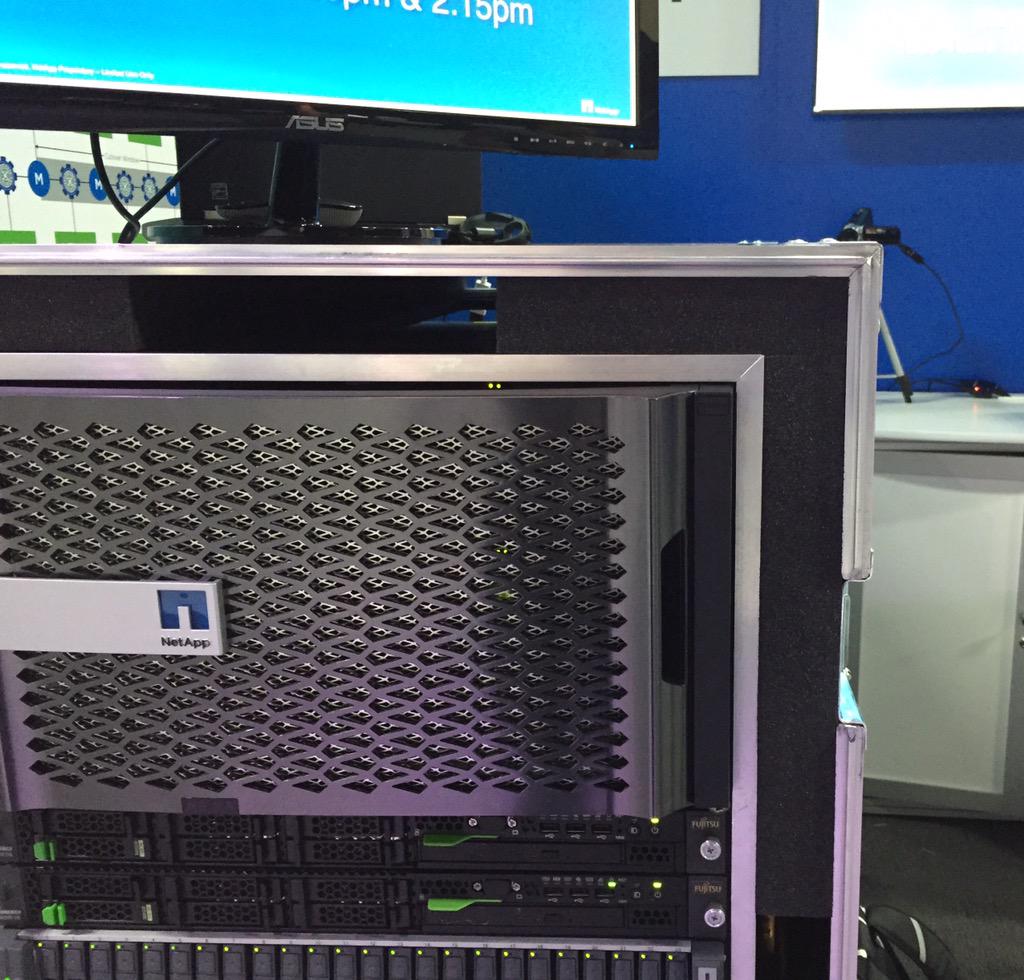 I’d like to say we did it without a hitch, but it’s a live demo – Murphy’s law dictates that whatever can happen, will happen. And with live demos, this is especially true. 🙂

But, even with a couple of snafus, we were able to complete the demo and I think it went pretty well. People seemed genuinely excited about what we were showing and had plenty of good questions.

Am I being vague?

You see, we can’t really say *what* exactly the demo is about right now on social media. But I can tell you there is a demo going on at Booth 303 at NetApp Insight 2015 in Las Vegas in Insight Central at 12:15PM and 2:15PM PST.

If you’re not familiar with the layout of the exhibit hall, just enter the doors, go through a couple of giant “N”s, pass the Lab on Demand area and bear left. We’re across from the NetApp Social Media Booth.

Tuesday through Thursday. I’ll be at the 2:15PM slots on Tues/Wed and then both slots on Thursday.

So come on out and see a live demo! You might even get to see how we handle stuff breaking in real time. 🙂

Also, check out my sessions going on this week.

1884-2: Unlocking the Mysteries of Multiprotocol NAS

This is a level 2 session where I will attempt to demystify multiprotocol NAS and discuss some best practices with regards to clustered Data ONTAP.

This is a level 3 session where I go pretty deep into how SecD works and how to use it to troubleshoot.

NetApp Insight 2015 – Las Vegas is getting closer. Have you built your schedule yet? Did you download the mobile app (available for free in the Android and Apple app stores)?

I fly out on Saturday, but have been working night and day with my colleagues on a special project that will make it’s debut at the conference.

We will have our own booth in Insight Central (across from the ONTAP booth) and will be doing demos twice a day. I can’t tell you much about *what* we’re doing until the conference itself, but know that it involved a travel rack and a DIY FlexPod that I have affectionately dubbed “FrankenPod.” (Just in time for Halloween!)

I’ve made some promotional videos leading up to the conference with footage I shot during the process. (Mostly because it was fun to do)

Also check out “Things You Should Know About NetApp Insight 2015.”

If you use Twitter, follow me @NFSDudeAbides and @NetAppInsightUS. Use the #NetAppInsight hashtag for updates and more info.

See you all there!