In case you hadn’t noticed, the NetApp community blog got a much needed face lift/modernizing this past week and has been re-branded as the “NetApp Newsroom.”

In addition to a much fresher look, the blog also resizes nicely for mobile devices. Some other enhancements include:

I’ll be contributing from time to time (such as with Tech Meme Friday), as will many of the NetApp A-Team and NetApp United members.

Be on the look out for a new FlexGroup blog on there soon!

Welcome to the Episode 83, part of the continuing series called “Behind the Scenes of the NetApp Tech ONTAP Podcast.”

What is OnCommand Unified Manager?

OnCommand Unified Manager is NetApp’s monitoring software package. It was the next evolution of Data Fabric Manager (DFM) and allows storage administrators to monitor capacity, performance and other storage events. It also allows you to set up notifications and run scripts when thresholds have been reached. It can be deployed on Linux or Windows in OCUM 7.2, as well as a standard OVA in ESXi.

Welcome to the Episode 82, part of the continuing series called “Behind the Scenes of the NetApp Tech ONTAP Podcast.”

This week on the podcast, it’s just Justin and Andrew chatting about the upcoming Docker conference in Austin, TX, as well as updates to the NetApp Docker Volume Plugin and Trident. We get a bit rambuncuous on this one and in honor of Easter, we leave plenty of Easter eggs!

If you’ll be in Austin for DockerCon or Boston for Red Hat Summit or OpenStack Summit, be sure to look for Andrew and the rest of the NetApp team!

For information on NetApp Docker Volume Plugin, Trident and more, go to the Pub:

Welcome to the Episode 81, part of the continuing series called “Behind the Scenes of the NetApp Tech ONTAP Podcast.”

This week on the podcast, we invited the NetApp Service Level Manager team to talk to us about how they’re revolutionizing storage as a service and automating day to day storage administration tasks. Join Executive Architect Evan Miller (@evancmiller), Product Manager Nagananda.Anur (naga@netapp.com) and Technical Director Ameet.Deulgaonkar (Ameet.Deulgaonkar@netapp.com, @Amyth18) as they detail the benefits of NetApp Service Level Manager!

For more details on NetApp Service Level Manager, we encourage you to check out the additional blogs below:

Recently, I installed some 10GB cards into an AFF8040 so I could run some FlexGroup performance tests (stay tuned for that). I was able to install the cards myself, but to get them connected to a network here at NetApp’s internal labs, you have to file a ticket. This should sound familiar to many people, as this is how real-world IT works.

So I filed the ticket and eventually, the cards were connected. However, just like in real-world IT, the network team has no idea what the storage team (me) has configured, and the storage team (me) has no idea how the network team has things configured. So we had to troubleshoot a bit to get the cards to ping correctly. Turns out, they had a vlan tag on the ports that weren’t needed. Removed those and fixed the port channel and cool! We now had two 10GB LACP interfaces on a 2 node cluster!

Turns out, ping is a great test for basic connectivity. But it’s awful for checking if stuff *actually works.* In this case, I could ping via the 10GB interfaces and even mount via NFSv3 and list directories, etc. But those are lightweight metadata operations.

Whenever I tried a heavier operation like a READ, WRITE or READDIRPLUS (incidentally, tab completion for a path when typing a command on an NFS mount? READDIRPLUS call), the client would hang indefinitely. When I would CTL + C out of the command, the process would sometimes also hang. And subsequent operations, including the GETATTR, LOOKUP, etc operations would also hang.

So, now I had a robust network that couldn’t even perform tab completions.

Narrowing down the issue

In the corresponding filer trace, I saw the READDIRPLUS call come in and get replied to, and then re-transmitted a bunch of times. But, as the trace above shows, the client never receives it.

Well, this one was easy – I had added an entire new network into the mix. End to end. My previous ports were 1GB and worked fine. This was 10GB infrastructure, with LACP and jumbo frames. And I had no control over that network. Thus, I was left with client and server troubleshooting for now. I didn’t want to file another ticket before I had done my due diligence, in case I had done something stupid (totally within the realm of possibility, naturally).

So where did I go from there?

The OSI model is something I used to take for granted as something interviewers asked because it seemed like a good question to stump people on. However, over the course of the last 10 years, I’ve come to realize it’s useful. What I was troubleshooting was NFS, which is all the way at layer 7 (the application layer). 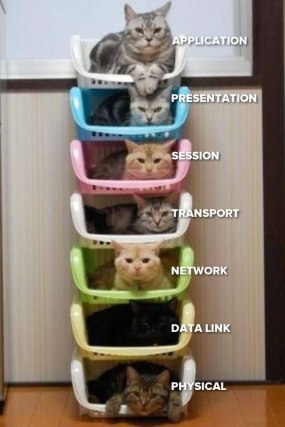 So why start at layers 1-3? Why not start where my problem is?

Because with years of experience, you learn that the issue is rarely at the layer you’re seeing the issue manifest. It’s almost always farther down the stack. Where do you think the “Is it plugged in?” joke comes from?

Layer 1 means, essentially, is it plugged in? In this case, yes, it was. But it also means “are we seeing errors on the interfaces that are plugged in?” In ONTAP, you can see that with this command:

In this case, the interface is pretty clean. No errors, no “no buffers,” no CRC errors, etc. I can also see that the ports are “up.” The up to downs are high, but that’s because I’ve been adding/removing this port from the ifgrp multiple times, which leads me to the next step…

Layer 2 includes the LACP/port channel, as well as the MTU settings.  Layer 3 can also include pings and some switches, as well as routing.

However, that doesn’t mean we’re done with layer 2; remember, basic pings worked fine, but those operate at 1500 MTU. That means we’re not actually testing jumbo frames here. The issue with the client was that any NFS operation that was not metadata was never making it back to the client; that suggests a network issue somewhere.

I didn’t mention before, but this cluster also has a properly working 1GB network on 1500 MTU on  the same subnet, so that told me routing was likely not an issue. And because the client was able to send the information just fine and had the 10GB established for a while, the issue likely wasn’t on the network segment the client was connected to. The problem resided somewhere between the filer 10GB ports and the new switch the ports were connected to. (Remember… what changed?)

From my experience with troubleshooting and general IT knowledge, I knew that for jumbo frames to work properly, they had to be configured up and down the entire stack of the network. I knew the client was configured for jumbo frames properly because it was a known entity that had been chugging along just fine. I also knew that the filer had jumbo frames enabled because I had control over those ports.

What I wasn’t sure of was if the switch had jumbo frames configured for the entire stack. I knew the switch ports were fine, but what about the switch uplinks?

Luckily, ping can tell us. Did you know you could ping using MTU sizes?

To ping using a packet size in Windows, use:

-f means “don’t fragment the packet.” That means, if I am sending a jumbo frame, don’t break it up into pieces to fit. If you ping using -f and a large MTU, the MTU size needs to be able to squeeze into the network MTU size. If it can’t, you’ll see this:

Then, try pinging with only -l (which specifies the packet size). If that fails, you have a good idea that your issue is MTU size. Note: My windows client didn’t have jumbo frames enabled, so I didn’t bother trying to use it to troubleshoot using it.

To ping using a packet size in Linux, use:

-f, again, means “don’t fragment the packet.” That means, if I am sending a jumbo frame, don’t break it up into pieces to fit. If you ping using -f and a large MTU, the MTU size needs to be able to squeeze into the network MTU size.

<hint> may be either “do” (prohibit fragmentation, even local one), “want” (do PMTU discovery, fragment locally when packet size is large), or “dont” (do not set DF flag).

Keep in mind that the MTU size you specify won’t be *exactly* 9000; there’s some overhead involved. In the case of Linux, we’re dealing with about 28 bytes. So an MTU of 9000 will actually come across as 9028 and complain about the packet being too long:

All good! Just to make sure, I pinged a known working client that has jumbo frames enabled end to end:

Looks like I have data pointing to jumbo frame configuration as my issue. And if you’ve ever dealt with a networking team, you’d better bring data. 🙂

The network team confirmed that the switch uplink was indeed not set to support jumbo frames. The change was going to take a bit of time, so rather than wait until then, I switched my ports to 1500 in the interim and everything was happy again. Once the jumbo frames get enabled on the cluster’s network segment, I can re-enable them on the cluster.

Where else can this issue crop up?

MTU mismatch is a colossal PITA. It’s hard to remember to look for it and hard to diagnose, especially if you don’t have access to all of the infrastructure.

Pretty much anything you do over a network can be affected, so if you run into a problem all the way up at the application layer, remember the OSI model and start with the following: