NFS has always had a running joke about security, with a play on the acronym stating that NFS was “Not For Security.”

With NFSv3 and prior, there was certainly truth to that, especially when NFS was mounted without Kerberos. But even using Kerberos in NFSv3 wasn’t necessarily secure, as it only was applied to the NFS packets and not the extraneous services like NLM, NSM, mountd, etc.

NFSv4.x improved NFS security greatly by implementing a single port, ACLs, ID domain names and more tightly integrated support for Kerberos, among other improvements. However, simple krb5 authentication by itself only encrypts the initial mounts and not the NFS packets themselves.

That’s where stronger Kerberos modes like krb5i and krb5p come into play. From the RedHat man pages:

sec=krb5p uses Kerberos V5 for user authentication, integrity checking, and encrypts NFS traffic to prevent traffic sniffing. This is the most secure setting, but it also involves the most performance overhead.

The p in krb5p stands for “privacy,” and it does that by way of Kerberos encryption of the NFS conversation end-to-end, via the specified encryption strength. The strongest you can currently use is AES-256. ONTAP 9.0 and later supports krb5p and AES-256 encryption. Krb5p is similar to SMB3 encryption/signing and sealing in its functionality.

Krb5p is also similar to SMB3 encryption in its performance impact; doing encryption of thousands of packets is expensive and can create CPU bottlenecks, unless…

AES-NI offloading is a feature available on specific Intel CPUs that allow encryption processing to use hardware acceleration instructions to offload processing for encryption. This allows the encryption to be done separately to alleviate performance bottlenecks. 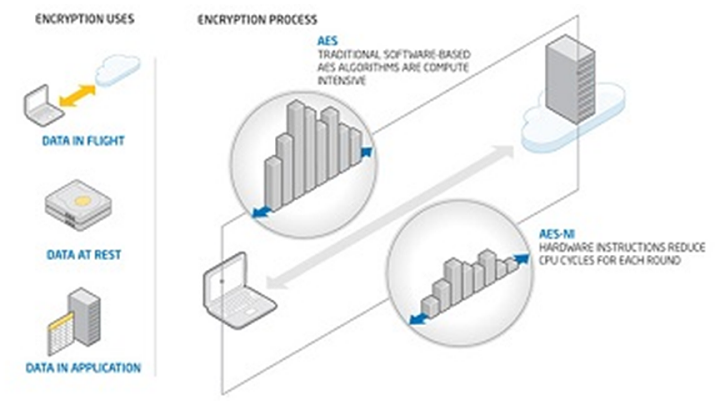 Comprised of seven new instructions, Intel® AES-NI gives your IT environment faster, more affordable data protection and greater security; making pervasive encryption feasible in areas where previously it was not.

ONTAP 9.1 provided support for AES-NI offloading for SMB3 encryption, which greatly improved performance. But krb5p offloading was only added as of ONTAP 9.2. If you plan on using the end-to-end encryption functionality in NFS with krb5p, use ONTAP 9.2 or later. For more information on what other features are in ONTAP 9.2, see the following post:

Krb5p support was added in ONTAP 9.0, but the performance was pretty awful, due to the lack of AES-NI support.

Here are some graphs using SIO with different flavors of Kerberos and AUTH_SYS in ONTAP 9.0. (All using NFSv4.1)

In ONTAP 9.0, krb5p wasn’t ever able to achieve above 12k IOPS for 4k reads in these SIO tests, and what it was able to achieve, it did it at some pretty severe latency. Krb5i did a little better, but krb5 and auth_sys performed way better.

For 8K sequential reads in ONTAP 9.0, latency is about the same. Fewer ops, but that’s because we’re doing the same amount of work in bigger I/O chunks.

NOTE: ONTAP 9.1 was not tested, but I’d expect similar performance, as we don’t do AES-NI offloading for NFS in that release.

Now, let’s compare those same tests to ONTAP 9.2 with the AES-NI offloading and other performance enhancements. In the graphs below, there are a few things to point out.

With ONTAP 9.2, you can now get enterprise class security with Kerberos 5p along with performance that doesn’t kill your workloads. If you’re doing NFS with any flavor of Kerberos, it makes a ton of sense to upgrade to ONTAP 9.2 to receive the performance benefits from AES-NI offloading. Keep in mind that upgrading ONTAP is non-disruptive to NFSv3, as it’s stateless, but will be slightly disruptive to CIFS/SMB and NFSv4.x workloads, due to the statefulness of the protocols.

3 thoughts on “Encrypt your NFS packets end to end with krb5p and ONTAP 9.2!”